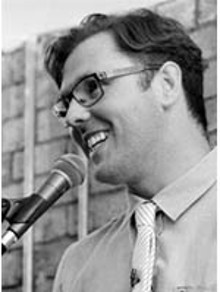 Damian Barr tells stories. Some are true. Some just might be. He is a journalist, Radio 4 playwright, Host of the Shoreditch House Literary Salon and cultural entrepreneur.

Recruited by the Times straight out of university, Damian is dedicated to discovering new cultural and social trends, people and places. His first Times column formed the basis of his first book. ‘Get It Together’ was first to explore the now widely recognized ‘quarter life crisis’. Serialized in the Times it was featured on Richard & Judy before being published globally.

As Creator & Host of the Shoreditch House Literary Salon, Damian has opened a new chapter for the UK’s live literary scene reaching new audiences and challenging existing ones. David Nicholls wowed with the proofs of One Day six months before publication. Exclusive but not excluding, the sessions are free to attend thanks to Damian’s deft sponsorship arrangements.

In 2011 Damian launched the Hay Festival at a special Salon and is currently talking to the Sunday Times Oxford Literary Festival and The Edinburgh Book Festival about special events in 2012. The British Council recognises the Salon’s unique ability to reach new audiences and is partnering with Damian world-wide starting with Moscow.

Also fascinated by film, Damian runs www.silent-cinema.co.uk and www.starliteurbandrivein.co.uk both of which are about enjoying movies in new ways and new places.

Contact us today for further information on our after dinner speakers or to book Damian Barr for your event.