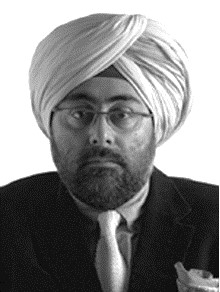 Equally as comfortable in the kitchen as on stage, Hardeep Singh-Kohli is a Glaswegian entrepreneur, responsible for one of the most successful Indian restaurant chains in the city, and an award-winning stand-up comedian.

A Glasgow University Law graduate, Hardeep knew from the outset that his future lay in entertainment. He joined a BBC training scheme, and moved to London to direct and produce kids TV, including Janet Street Porter’s series Reportage, and the RTS and BAFTA winner It Will Never Work.

Meet the Magoons for Channel 4’s Comedy Lab brought Hardeep to the attention of comedy fans and producers, and was nominated for the Golden Rose at the Montreux Comedy Festival. Next Hardeep worked on the BAFTA winning ‘In Search of the Tartan Turban’, in which he explored his cultural identity as a British-Scottish Asian.

Relishing to opportunity to mix TV with cooking, Hardeep adored his time on ‘Celebrity MasterChef’, in which he reached the final. He also presented a UKTV cooking series with John Torode, and his book ‘Indian Takeaway: One Man’s Attempt to Cook his Way Home’ has become a bestseller, and takes a deeply insightful look into the mixed cultural and culinary identity of Britain’s Indian community.

Contact us today for further information on our after dinner speakers or to book Hardeep Singh Kohli for your event.