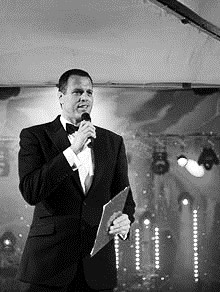 At 6'10" Martin Bayfield was one of the tallest players in rugby, a gift he used to full advantage as one of England's most potent forwards. Since retiring, his height has helped win him the part of Robbie Coltrane's body double as the giant Hagrid in the Harry Potter films.

On the field Martin enjoyed a successful international career, winning 31 England caps and two Grand Slams. He played in the World Cup in South Africa and was selected to represent the British Lions in New Zealand. He is now an established member of the BBC commentary team, as well as host of Channel Five's NFL coverage and The World's Strongest Man.

A serious neck injury in 1998 ended his career though he still maintains a close link with Rugby and sport in general, and is currently working on various schemes to encourage the participation and education of sport amongst children and young adults.

Martin is a popular after-dinner speaker and since retirement has moved into broadcasting, commentating for the BBC, hosting Channel Five's NFL coverage and “The World's Strongest Man” and covering the Rugby World Cup 2011 for ITV. In addition, Martin has appeared on BBC Radio 5 Live as a Rugby Correspondent. Martin is also a presenter on BBC's Crimewatch.

Contact us today for further information on our after dinner speakers or to book Martin Bayfield for your event.