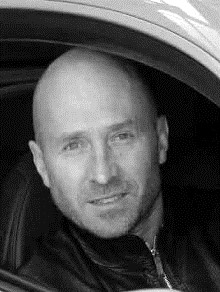 From Formula One to the small screen, from sporting champion to TV legend - Perry McCarthy left the fast lane to become the original Stig on Top Gear.

Perry only discovered a love of motor racing at the age of 18, but as a sport that requires enormous amounts of funding, he had to work on an oil rig for two years before he could get started. At the age of 21 other were already winning Grand Prix – so Perry was on the back foot from day one.

Perry’s 10-year fight to reach the pinnacle of the sport paid off in 1992 when he was chosen to drive for the fledgling Andrea Moda Formula One organisation. The dream turned into a nightmare as the team lurched from one catastrophe to the next.

With so much adversity, self-doubt and rejection blocking his path to success, Perry refused to give up. Believing he was good enough to do it was the only was he could face the obstacles head-on, and ride through the ranks.

Perry’s exuberant personality and sharp humour, combined with his complete refusal to surrender to failure have made him popular with corporate audiences, as well as with the press.

Contact us today for further information on our after dinner speakers or to book Perry McCarthy for your event.