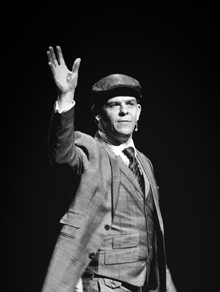 After dinner entertainer Philip Escoffey occupies a unique world – that of mind readers, the paranormal and psychics, which has divided us for as long as it has intrigued us.

If a stranger told you who your favourite teacher was, how would you feel? If he also knew what lottery numbers you'd choose, what would you think? In its most contemporary sense, he is a mind reader. He mingles with guests, talking and listening, and then reads their minds.

Philip has spent the last ten years travelling the world, leaving the rich and the royal intrigued and often embarrassingly clingy. Any opportunity to see mind reading's enfant terrible live should be taken.

Premiering at Sydney Opera House in 2012, he’s been touring the world as one of the original cast in the global stage phenomenon, ‘The Illusionists’. It’s been performed to over half a million people in theatres and arenas all over the world, including 7 shows at London's Hammersmith Apollo.

What Philip does is as effective around a dinner table as it is at a drinks party. His performance is self-contained and requires no specific conditions. Philip can work with English, French, German and Italian speaking audiences.

Contact us today for further information on our after dinner speakers or to book Philip Escoffey for your event.