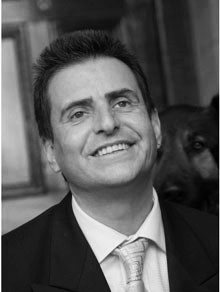 Steve Cunningham is an international motivational speaker, conference speaker and after dinner speaker.

He has been totally blind from the age of 12, but has never allowed his disability to define or restrict him. Steve is a witty, articulate and passionate man who tells it how it is, and does not suffer fools gladly.

Sport has always been Steve’s passion, and when his aspirations of becoming a professional footballer were dashed, he simply amended his dream and went on to captain the England Blind Football team, become a member of the England Blind Cricket Eleven and play to a golfing handicap of 24. Steve also broke the 100m World Junior Blind sprint title.

Steve had a dream to drive fast cars, so took to the wheel and powered to a new world blind land speed record. He then set new onshore and offshore powerboat records. Holding records on land and sea, Steve then took to the air, and found international media fame as the world’s first blind pilot.

But breaking records is easier than breaking those barriers we set ourselves, and his deeply-moving story takes audiences on his journey from despair to success. The audience will learn that anyone can break barriers; that the path to true success is in our minds, and not our ability or environment.

As a motivator he is second to none, giving a complete insight into his own personal achievements thus providing a new perspective for others, and inspiring real change and determination.

Contact us today for further information on our after dinner speakers or to book Steve Cunningham for your event.