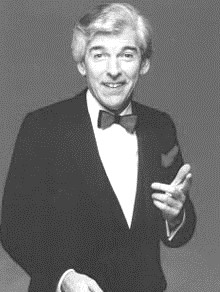 One of the most popular TV faces of the 70s and 80s, Tom O’Connor is a British entertainment legend.

Presenter of such iconic shows as ‘Name That Tune’, ‘Cross Wits’ and ‘Gambit’, amongst many others, Tom is a household name.

An instant hit, Tom was snapped up by TV producers and after winning three separate shows on ‘Opportunity Knocks’ he found himself hosting ‘Wednesday At 8’, followed closely by his very own programme, ‘The Tom O’Connor Show’.

An invitation to the Royal Variety Show cemented his place in the British hall of fame. Tom’s work on stage has also earned him many prestigious accolades and he has featured at the famous Carnegie Hall in Manhattan.

Contact us today for further information on our after dinner speakers or to book Terry O’Connor for your event.