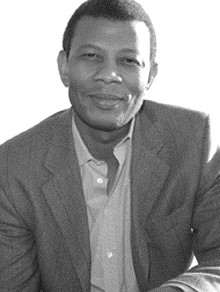 The winner of two annual Entrepreneur Awards, Wilfred Emmanuel-Jones is a classic entrepreneur with the “anything is possible” attitude to everything he approaches.

He is an inspiration to others and is an excellent conference keynote, after dinner speaker, and awards host.

He is credited with bringing many of the top celebrity chefs to the small screen including Gordon Ramsay, Antony Worrall-Thompson, Brian Turner and James Martin, before founding a food and drink marketing company in London.

Wilfred subsequently fulfilled a lifelong ambition in purchasing a small farm in Devon, and has been responsible for one of the most successful food launches of recent times in the UK with his own range of meat products under The Black Farmer® label.

In 2006 Wilfred was selected to represent the new Chippenham constituency for the Conservative party. He was unsuccessful in his attempt to become the next MP for Chippenham, losing out to the Liberal Democrat candidate. Wilfred still believes that the political parties in the UK have a long way to go to encourage black people into their parties and those with political ambition have a high mountain to climb. But with the inspiration of Barack Obama's success, Wilfred's political journey is likely to be an interesting one!

Contact us today for further information on our after dinner speakers or to book Wilfred Emmanuel-Jones for your event.