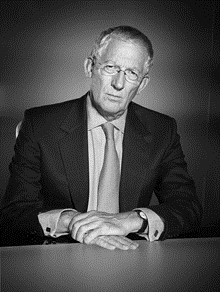 Nick Hewer was Sir Alan Sugar’s right-hand man on The Apprentice. He is an experienced and engaging after dinner and keynote speaker and awards host.

Nick Hewer’s PR firm was chosen to represent Amstrad in the eighties and soon became responsible for media handling of all Alan Sugar’s business and charitable activities. For over 20 years, Nick Hewer played an integral part in Amstrad’s management structure. Nick built up a long and impressive client list.

After selling the business, Nick Hewer retired early to his house in south west France; but having become firm friends with Sir Alan, he was called back to negotiate with the producers of what was to become a ground-breaking reality TV show. The tables were turned when Sugar persuaded Nick to take an onscreen role and promised to negotiate his fees.

Since then Nick Hewer and his fellow previous aides Margaret Mountford and Karen Brady have become surprising stars of the show. Nick’s expressions, borne of wonderfully dry humour and a lifetime’s business experience, tell you exactly what he thinks of the contestants.

Contact us today for further information on our after dinner speakers or to book Nick Hewer for your event.