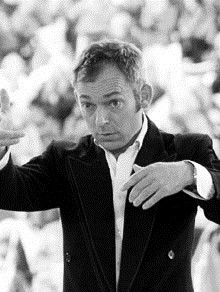 Charles Hazlewood hosts a motivational and highly interactive presentation, which draws metaphors between a working orchestra and a typical business environment.

Charles is on a mission to make the world a better place through music. Charles founded the world's first paraorchestra, which performed at the closing ceremony of the London 2012 Olympic and Paralympic games, and to the European Parliament and Barack Obama in 2014.

Charlie occupies a unique position in British musical life. The combination of his outstanding musical talent and versatility as a conductor, and his passion for bringing classical music to the widest possible audience, has led to a significant profile as a conductor in the broadcast media, and on the world stage.

He occupies a central position on BBC Radio 3, with Discovering Music, where he deconstructs great orchestral music with the BBC orchestras and his own two orchestras. He also hosts Radio 2's The Charles Hazlewood Show, exploring his vast and catholic music tastes, in sessions recorded on his farm in Somerset. The show has won 3 Sony Awards.

Charles launched his own orchestral music festival at his farm near Glastonbury, Somerset in August 2009. In association with his friend and classic music enthusiast Deborah Meadon, Charles was determined to get great orchestral music out of the traditional confines of the concert hall and give local people an experience of a world class symphony orchestra.

Contact us today for further information on our after dinner speakers or to book Charles Hazlewood for your event.