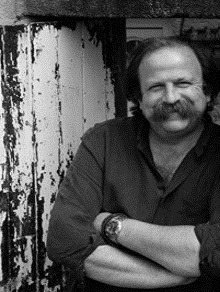 Eco Engineer, Ex-Army Colonel and TV presenter, Dick Strawbridge is recognisable nationwide for his handlebar moustache and is an engineer-inventor and sustainability expert.

In 1978 Dick joined the Army and over the next 20 years he rose from Troop Commander to Lieutenant Colonel, completing a degree in Engineering at the same time.

Still serving in the Army, Dick was persuaded to audition for C4's 'Scrapheap'. A star was born. Appealing to producers for his leadership abilities and engineering skills, as well as his sparkly personality, it was Dick’s fabulous moustache that sealed the deal!

Since leaving the army, Dick has been running leadership and teamwork courses. He has also filmed 'Crafty Tricks of War' for BBC 2, which celebrated British practical ingenuity in a military setting – he reconstructed and tested some of the most unusual inventions of war.

BBC series Geronimo, provided a platform for Dick's impressive technical knowledge. On screen, he built some of the craziest machines ever seen! Not Easy Being Green was a series which followed the family as they moved down to their smallholding in Cornwall and their attempt to live as green a life as possible.

Contact us today for further information on our after dinner speakers or to book Dick Strawbridge for your event.