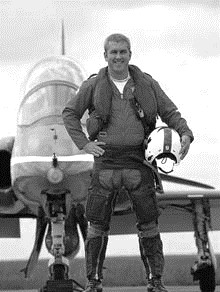 He is an adept and inspirational after dinner and keynote speaker.

As an 18 year old Army Officer, Justin obtained a degree in physics and subsequently joined the Royal Air Force. For 6 years he flew the Tornado F3, the RAF’s front-line air defence fighter aircraft, taking part in both training and operational deployments all over the world, including support of the UN peacekeeping operation. He became a ‘force commander’ on the Tornado, qualified to lead any scale of mission in any theatre. Justin was subsequently selected for the Red Arrows performing over 250 displays worldwide and was the Deputy Team Leader and Executive Officer.

An inspiring speaker with a wealth of experience in delivering results in an environment where failure is not an option and mistakes cost lives, Justin has the ability to motivate and entertain any audience.

Justin Hughes also offers the opportunity to deliver exciting seminars which involve a highly engaging insight into high-performance organisations. Through a powerful blend of dramatic in-cockpit video footage, interactive group exercises and real-life case studies, Justin and his team create a high-impact event which is guaranteed to inform, engage and inspire.

Contact us today for further information on our after dinner speakers or to book Justin Hughes for your event.