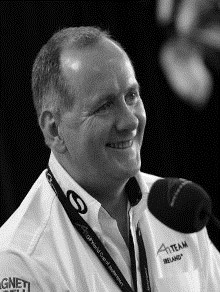 Mark’s luminous career as a Formula One journalist and broadcaster began in 1985, when he was a regular TV pundit and radio voice, as well as a highly respected consultant for the primary sponsors of the McLaren and Williams teams.

In 2009 he joined the immense brand, Cosworth, where he took charge of re-establishing its Formula One engine supply business to four teams, before leaving at the end of the 2011 season to focus on his own business interests.

His business commitments include Status Grand Prix, a World Championship-winning race team he founded in 2005, the CMS Motor Sport consultancy which imparts business to business lessons from Formula One, and Team Franco, an education-based animated children’s TV series based on racing.

At Cosworth he joined with competitors from Ferrari, Renault and Mercedes in 2009 to create technically challenging but highly relevant power unit technologies which were introduced in 2014.

Contact us today for further information on our after dinner speakers or to book Mark Gallagher for your event.