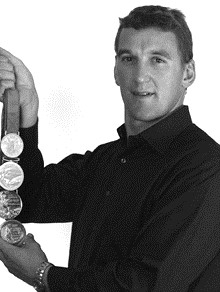 With four Olympic Golds, and ten world championship medals under his belt, rower Matthew Pinsent is one of the UK’s most decorated athletes and experienced broadcasters.

For teamwork, motivation and success, he is unparalleled in his expertise and keynote speeches.

Matthew made the move from his position as president of the Oxford Rowing Club, into a Coxless Pair with Sir Steve Redgrave where they achieved a gold medal at the Barcelona Olympics. The duo sustained their extraordinary performance levels at the Atlanta Olympics in 1996 with another Gold medal, and throughout that decade, they produced seven World Championship wins.

For the Sydney Olympics, Matthew and Steve joined up with James Cracknell and Tim Foster, to win yet another gold medal, in a race which has become known as one of Britain’s greatest sporting moments, and made the team members household names. His record-breaking coxless pairs partnership with James Cracknell was undefeated.

Contact us today for further information on our after dinner speakers or to book Matthew Pinsent for your event.