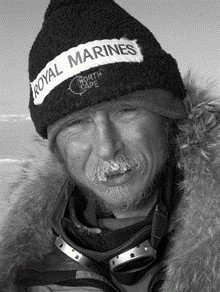 Alan Chambers spent 16 years exploring the world’s most hostile environments, including jungles, deserts and frozen tundra. As a keynote speaker he is unparalleled in his skill at relating adventure to business.

For 16 years Alan travelled the world as part of his military service and qualified as a diver, parachutist, paramedic and ski survival instructor. After leading the first successful British unsupported expedition from Canada to the Geographic North Pole, Alan made the record books. More men have walked on the moon than walked to the North Pole unsupported.

Only with strict planning, resolute determination, and unflinching focus, the ten-week expedition was complete. At the age of 32, Alan was awarded the MBE for Determined Leadership in Constant Adversity.

With a unique ability to use tales of his adventures to inspire, Alan is honest, funny, candid, and humble, and engages audiences in his story at a deep level, with a likeable yet determined style of leadership.

His programme, the Highest Classroom on Earth, was shown on BBC World, and highlighted his survival skills as he battled to teach underprivileged kids in the worst storms in the Everest region at that time of year in over half a century.

Contact us today for further information on our after dinner speakers or to book Alan Chambers for your event.