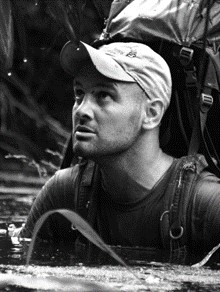 His journey began in 2008, and living off piranha and rice, he made his way through Peru, Colombia and Brazil. When his sponsors cited the recession as a reason to pull out, Ed’s GPS system failed, and his medical insurance lapsed, the chances of achieving his goal seemed minimal. But with sheer grit and unparalleled fortitude, Ed persevered and realized his dream.

Honest, pragmatic and laid back, Ed’s motivational business messages are full of value - with leadership, adversity, risk and perseverance as his main themes.

To succeed against all odds, Ed had to overcome daily challenges, including flooding, electric eels, venomous snakes, jaguars and suspicious local tribes. Ed and his travelling partner were even held on suspicion of murder for two days! In an area rife with drug trafficking and terrorism, strangers are treated with wariness and distrust, and fear caused locals to become hostile. To win them over, and to ensure safe passage, a hot, thirsty and exhausted Ed, had to remain focussed and positive. Using only his sense of humour, natural charm and innate survival instincts, he had to learn to communicate and ingratiate himself to cynical tribesmen.

Ed took the British public with him on his adventure, by blogging and filming throughout. His ability to survive the world’s most hostile environmental and human challenges endeared him to the masses, and he spends his time motivating audiences to achieve their dreams.

Contact us today for further information on our after dinner speakers or to book Ed Stafford for your event.