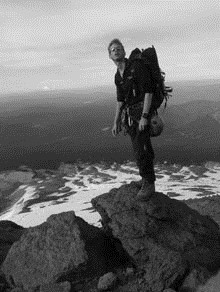 Jake is an experienced public speaker whose incredible story of climbing Mt Everest aged only 21 and his long running quest to climb K2 are inspirational tales of determination, tenacity and an unerring will to succeed.

Jake was only 14 when he set his sights on wanting to climb the ‘7 Summits’ – the highest mountain on each continent. At 6.30am on the 4th June 2005, aged only 21 and 135 days old, he reached the summit of Mount Everest, the highest mountain in the world and his 7th continental highpoint. At the time, he was the youngest Briton to climb Mt Everest, and the youngest man in the world to complete the 7 Summits.

Since 2008 Jake has been focusing on trying to climb K2 in Pakistan, the second highest mountain in the world and arguably the most difficult and dangerous in the world with a 1 in 5 death rate. He made attempts in 2009 and 2016, but on both occasions he was forced to turn back on his summit attempt, mere hours from his goal. Undeterred, in 2018 he returned for a third time, and on the 21st July 2018 he finally stood on the summit of K2. In doing so he joined an elite and extremely small group of some of the world’s best climbers to have done the same – fewer than 400 people who have stood on the top of K2 (more people have been into space) and 85 have died trying. Jake’s 10 year odyssey shows that perseverance can truly pay off.

Jake has worked as a full-time leadership development consultant for the Inspirational Development Group (IDG) since 2010. IDG offers first-class training designed to transform the behaviour of individuals and teams, and lead to sustainable change within an organisation. They offer a range of bespoke Leadership Development programmes focussing on the interlocking areas of Leadership, Followership and Partnership, to produce accomplished leaders who are also effective followers and highly skilled team players.

He was an ambassador to the Duke of Edinburgh’s Awards Scheme, and regularly presented the Gold awards at St James’s Palace, and has worked closely with a number of charities including Walking With The Wounded, Help for Heroes, The Prince’s Trust, the Prince’s Teaching Institute, Make-A-Wish Foundation, and the CAIRN Trust.

Jake is also a commissioned officer in the Army Reserve, and in 2012 spent 6.5 months in Afghanistan as a Battlegroup Influence and Consequence Management Officer.

Jake is available as a thought-provoking, inspirational and motivational speaker for events around the world. His presentation can be tailored specifically to the audience and to fulfil the aims and objectives of the client. He is comfortable providing focused and intimate discussion with small teams of Senior Executives, or presenting to large audiences of 1800+.

Contact us today for further information on our after dinner speakers or to book Jake Meyer for your event.