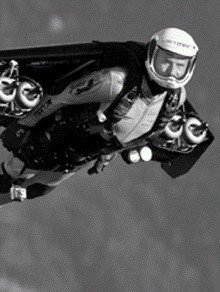 Yves Rossy (Jetman) is a unique and inspirational after dinner speaker. Flying under a jet wing is the culmination of a 30 year career interspersed with sensational exploits.

Treading the beaten track is something for others to do; for Yves Rossy, it’s not an option. He wants to fly like a bird, with a minimum of instruments but with the power to steer himself in space. The idea came to him to power a wing using scaled down jet engines.

In 2004 Yves Rossy developed a rigid deployable carbon-kevlar wing manufactured by ACT Composites. At the Al-Aïn air show – probably the world’s largest event of its kind – he went into a spin, released the wing which tore its parachute. The craft was partially destroyed. In 2005, he completed two successful flights under a wing fitted with two jet engines.

On September 26th, 2008, Yves became the first man to fly across the English Channel from Calais, France to Dover, UK, using a homemade jet-powered wing. He covered a distance of 35 kilometres in 13 minutes.

On July 2nd, 2010, Yves has realized his first flight in formation with two other aircraft. He jumped out of a Pilatus PC-6 at an altitude of 2'500 meters, and came close to the 2 Boeing Stearmans of the Breitling Wingwalkers team.

Two years after crossing the Channel, the technological evolutions of his wing allowed Jetman to perform his first aerobatics in the air. On November 5th, 2010, Jetman accomplished his first looping in front of a hot-air balloon.

Contact us today for further information on our after dinner speakers or to book Yves Rossy for your event.