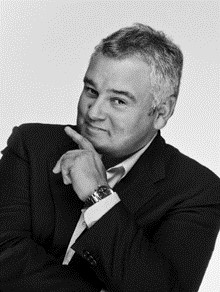 As Britain’s longest serving Breakfast Television host Eamonn Holmes has told us what’s happening in the World for twenty years.

His three hour ‘Sunrise with Eamonn Holmes’ programme on Sky News is beamed around the Globe, making him as relevant as far afield as Dubai, Australia, India and Africa, and he's an awards host of the highest calibre.

Britain has grown up with Eamonn – he is an accessible host both in terms of exposure and personality. He is renowned for his ability to give an interview or event the right level of gravitas or humour – switching between the two effortlessly. Eamonn is a listener, a people’s person and a man who commands a room.

As a host for your event he is energetic, adaptable, and is often partnered by his wife and on-screen host of ITV’s This Morning Ruth Langsford, or his Sunrise colleague Charlotte Hawkins.

Contact us today for further information on Eamonn Holmes or to make a booking.