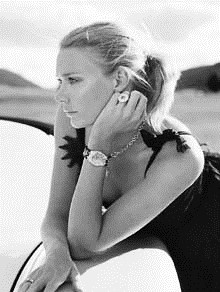 Jodie was discovered by a modelling agent at the age of 15, and throughout her modelling and polo careers has uniquely blended the worlds of designer fashion and glamorous sports.

Jodie is also an acclaimed rally driver who became a Top Gear legend after topping the ‘star in a reasonably priced car’ leader board for an entire series, as well as enjoying success as a high octane Maserati racing driver, competing at some of Europe’s most prestigious racing circuits. Lending her image to luxury brands, Jodie’s international career has taken her to catwalks around the world and onto the covers of the world’s top glossy magazines.

Jodie has presented coverage of the Red Bull Air Race around the globe and the Turbo Tennis tournament, both for Channel 4, and she teamed up with fashion brand Oli to develop a best-selling fashion range. She featured in BBC1’s ‘Who Do You Think You Are’ and ‘Strictly Come Dancing’, and as a special guest on ‘Britain's Next Top Model’.

Her charity initiative – The Jodie Kidd Foundation – is a vehicle for her philanthropic leanings, as was her role in The Big Splash Swimathon alongside Olympic Gold Medallist Duncan Goodhew, in association with Sports Relief.

Contact us today for further information on Jodie Kidd or to make a booking.