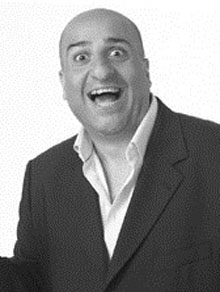 Omid Djalili is a popular stand up comedian and actor, his success on the stage has resulted in him becoming an adept and entertaining awards host and he is high demand at corporate events.

His show ‘No Agenda’ in 2005 sold a record-breaking number of tickets at the Edinburgh Fringe, after the Fringe success the show toured nationwide and was completely sold out and was later released on DVD.

His 2008 show, ‘Omid Djalili Live’ was an even bigger success, he performed one of his 53 tour dates at the London Hammersmith Apollo and the tour was a sell-out.

As an actor, Omid has had several successful roles including a part in ‘Pirates of the Caribbean III’ alongside Hollywood stars Johnny Depp, Keira Knightley and Keith Richards.

Contact us today for further information on Omid Djalili or to make a booking.