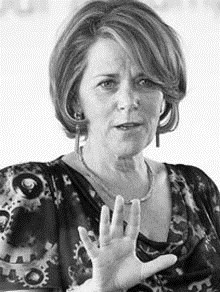 Brimming with passion, experience and a wealth of industry tales and valuable management expertise, Lorraine Heggessey was the first female controller of BBC1.

Her strong track record of spearheading radical change, and her legendary shake up of the channel’s schedule and branding turned it into the most watched channel in the UK, overtaking its commercial competitor ITV for the first time.

Lorraine made a name for herself in the history of TV by commissioning ‘Strictly Come Dancing’ and bringing back ‘Doctor Who’ and was named by GQ magazine as the third most influential woman in Britain.

On a break from her BBC career, Lorraine took the reins of Talkback Thames, where her creativity and talent management skills drove enormous commercial success. She brought in a new team, revitalized the programming portfolio and increased profits by over 50 percent in her first two years.

She was responsible for around 800 hours of television a year, including the UK’s two most popular shows ‘The X Factor’ and ‘Britain’s Got Talent’ and other hits such as ‘The Apprentice’, ‘Grand Designs’ and ‘QI’.

Contact us today for further information on our after dinner speakers or to book Lorraine Heggessey for your event.