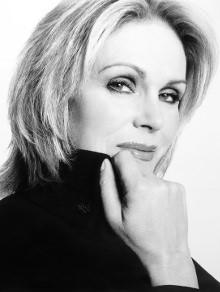 'Absolutely Fabulous' actress Joanna Lumley OBE is a former model, a human rights activist who supports the Ghurkhas and is an animal welfare activist.

An aspiring actress, she first came to fame as a model in London's swinging 1960s, where she was photographed by the greats. She was designer Jean Muir's muse and became one of the top ten most-booked models of the 1960s.

It was her reinvention as a comic actress in her role as champagne-loving, chain-smoking Patsy in ‘Absolutely Fabulous’, from 1992-2005, that cemented her role as one of the UK's best loved & most respected actresses.

In 2008 Joanna became the public face of a campaign to provide Gurkha veterans with the right to settle in Britain. She is also a vegetarian and an active crusader for animal rights.

She has won three BAFTA awards and a British Comedy Award.