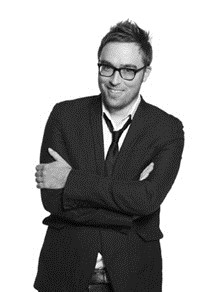 Author, TV host and presenter, Danny Wallace is a witty and interesting after dinner speaker and awards presenter.

Danny Wallace is both writer and presenter, founder of the Join Me movement and head of a self-declared nation state based in his bedroom. He also acts as quizmaster on School's Out, co-hosts Test the Nation with Anne Robinson and presents his own show on Xfm.

Danny was part of the team behind Dead Ringers and The Mighty Boosh. His break came when he challenged his then flat-mate, the comedian Dave Gorman, to find 54 other people called Dave Gorman from around the globe. An award-winning stage show and BBC series followed.

A former BBC comedy producer, he produced the Mighty Boosh (Radio 4), Ross Noble Goes Global (Radio 4) and many others. He has written for dozens of newspapers and magazines, including Elle, Cosmopolitan, The Guardian, and The Sun.

Contact us today for further information on our after dinner speakers or to book Danny Wallace for your event.