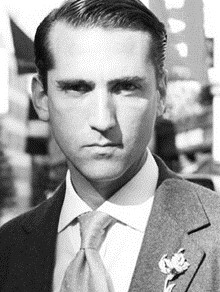 Author, curator and broadcaster James Sherwood is a charming and erudite speaker on fashion and luxury.

He has written about fashion, bespoke tailoring and the diamond business for over twenty years for titles such as the Financial Times, the International Herald Tribune and the Independent on Sunday and is now Editor-at-Large of Singapore-based bible of men's elegance The Rake.

In 2006, James was commissioned to curate the first major retrospective of over two centuries of Savile Row tailoring - The London Cut - which was shown for a month at the Palazzo Pitti in Florence before travelling to the British Ambassadors' Residences in Paris and Tokyo.

James curated the Archive Room at No 1 Savile Row for Gieves & Hawkes with the last of the Gieve family Mr Robert Gieve; showing the Archive to HRH the Prince of Wales and the Duchess of Cornwall's visit to the house in 2009. He is now working with the founding father of Savile Row, Henry Poole & Co, to catalogue and restore over 150 of the house's historic customer ledgers.

Between 2004 and 2010, James was the BBC's fashion critic at Royal Ascot. He was a guest of BBC News at the Royal Wedding of the Duke and Duchess of Cambridge. He has appeared on a number of BBC documentaries including a three one-hour Savile Row series and also BBC2 series British Style Genius. He has also appeared on The One Show, Richard & Judy, BBC Breakfast and Sky.

Contact us today for further information on our after dinner speakers or to book James Sherwood for your event.