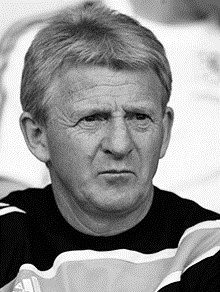 Footballer Gordon Strachan calls on his illustrious career to give hilarious, clever and inspiring after dinner speeches.

Ron Atkinson brought Gordon to Old Trafford in 1984 where he won an FA Cup Winners medal and played again under Ferguson before moving to Leeds United. He captained Leeds to the Division Two title in 1990 and two years later, at the age of 35, led them to the Division One Championship in its last year before the inception of the Premier League.

Gordon became manager of Coventry in 1996 and left in 2001. He immediately returned to the Premier League with Southampton and guided that club to the 2003 FA Cup Final. Gordon resigned from Southampton in 2004 and took a break from management before returning to Scotland to become manager of Celtic. With Celtic he achieved three successive league titles before resigning in May 2009. Five months later he became manager of Middlesbrough but left the club after a year.

Contact us today for further information on our after dinner speakers or to book Gordon Strachan for your event.