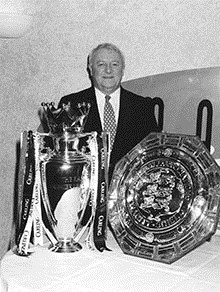 Tommy was a highly successful football player and played for some of the best clubs in the UK including Celtic, Arsenal and Chelsea; in addition to this he won twenty-five caps for Scotland.

When Tommy’s playing career came to an end he decided to become a Football Manager; Tommy became the manager of twelve clubs in total including Chelsea, Aston Villa, and Manchester United to name only a few.

Similar to most football managers, Tommy went through various ups and downs throughout his career and is remembered as one of our football legends; he managed the Scotland team when they qualified for the World Cup in 1974 and took Manchester United from the Second Division league in 1975 to FA Cup winners two years later.

Since retiring from his managerial position, Tommy has become a popular after dinner speaker; his witty humour and hilarious anecdotes have made him a favourite among corporate audiences.

Contact us today for further information on our after dinner speakers or to book Tommy Docherty for your event.