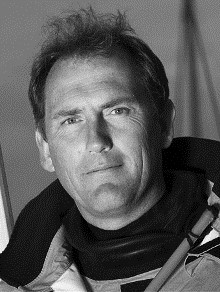 Pete Goss MBE is a sailor and adventurer turned entrepreneur and author of the bestselling book Close to the Wind.

Pete Goss is the ultimate competitor, whose outstanding ‘can do’ philosophy, combined with his limitless courage to overcome all the risks and dangers became abundantly clear in the world's toughest yacht race, 'The Vendée Globe non-stop, single-handed Round the World Race'.

The drama of the race unfolded in the notorious hostile environment of the southern ocean. The world looked on as huge seas and winds of up to 80mph pounded Raphael Dinelli’s stricken boat; he was facing certain death. After receiving the distress call, Pete immediately turned his boat around and battled for two days against hurricane force winds to reach Dinelli and rescue him.

For his heroic rescue of Dinelli, he was awarded France’s highest decoration, the Legion d’Honneur by President Chirac of France, and the MBE by Her Majesty the Queen.

His single-minded determination during the last leg of the race became abundantly clear when he was forced to operate on himself without anaesthetic and just a few basic instructions to repair ruptured muscles around his elbow.

People come away inspired from Pete’s talks, sharing in his ethos of taking responsibility for what they want to achieve and for what they believe in.

Contact us today for further information on our after dinner speakers or to book Pete Goss for your event.