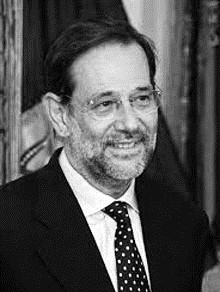 Physicist, politician and Secretary General of NATO from 1995-1999, Javier Solana was previously High Representative for the Common Foreign and Security Policy of the EU from 1999-2009.

Uniquely placed to offer insights into security, defence and international relations, Javier’s keynotes and after dinner speeches provide a rarely-seen perspective from the inner sanctum of world politics.

Having held top positions at the helm of two of the most influential and relevant organizations in the world: NATO and the EU, Javier has also been head of the European Defence Agency, and is considered to be one of the most esteemed and authoritative figures in the international political sphere.

During his time at NATO, Javier sent the first mission of peacekeepers led by the Alliance to Bosnia-Herzegovina; the creation of the Combined Joint Task Forces and the invitation to former communist states to join the organization and the founding of NATO-Russia relations.

In 1999 Javier became secretary-general of the Council of the EU and its first High Representative for Common Foreign and Security Policy. His mission was to present ideas to help senior EU figures agree on foreign and security policy issues, increasing the political clout of the EU in international affairs.

Contact us today for further information on our after dinner speakers or to book Javier Solana for your event.