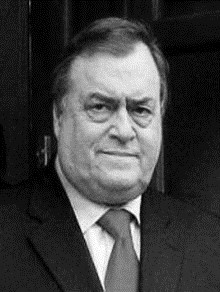 John Prescott served as the Deputy Prime Minister to Tony Blair and played a key role in the Labour government during Blair’s run as Prime Minister.

Famous for his position as Deputy Prime Minister, John played a vital role in the Labour government as he was also in charge of the brand new Department for Environment, Transport and Regions. John has strong views on climate change and made it his mission to encourage the UK to take climate change seriously; he also developed a good relationship with Al Gore.

He toured the UK speaking to school children about climate change in an attempt to encourage change in the next generation. Now that he no longer works in parliament he spends much of his time public speaking and he has also spoken to the Chinese government about their idea to create sustainable cities.

John is a well respected political keynote speaker because he can talk about his time working in parliament as well as his extensive knowledge of climate change and regeneration in the housing sector. He is a fascinating and engaging speaker who can keep the audience entertained with humorous stories from his political career.

Contact us today for further information on our after dinner speakers or to book John Prescott for your event.