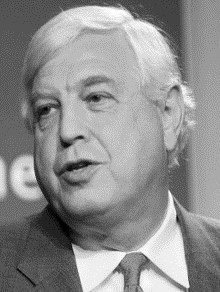 BBC News World Affairs editor, John Simpson is one of the UK’s most lauded and loved TV news veterans.

Joining the BBC as a trainee journalist in 1966, John quickly earned a reputation as steadfast, hard-nosed and determined. Before he knew it, John was knee-deep in war zones; face to face with controversial world leaders and challenging dictators with a camera, a microphone and probing questions.

Jobs as Diplomatic Editor and presenter of the Nine O'clock News were followed by a role as a correspondent in South Africa, Brussels and Dublin, and then, in 1988, John was appointed World Affairs Editor.

Reporting from war-torn Afghanistan; from central Belgrade during the Kosovo crisis, and determined to stay in Serbia even when authorities expelled him, John’s tenacity and speed made him one of the most admired reporters from almost every international trouble-zone.

Contact us today for further information on our after dinner speakers or to book John Simpson for your event.