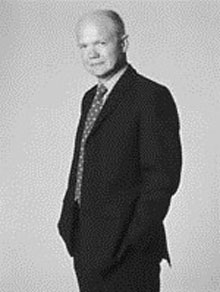 Former leader of the Conservative Party and Foreign Secretary, William Hague uses his blend of corporate and political experience to engage with the audience.

William Hague was born and brought up in Yorkshire, where he served as Member of Parliament for Richmond until 2015. The lad from the local comprehensive created a sensation as a schoolboy speaker at the Conservative Party Conference, and William’s political career was born.

After completing a first class degree at Oxford and then gaining a distinction in his MBA at INSEAD, William spent five years as a consultant at McKinsey & Co before entering the House of Commons, where he was appointed Minister for Pensions and then Secretary of State for Wales.

His time in the cabinet and at the head of a political party has instilled in William a deep understanding of how people work together, or fail to do so, and how to cope with significant setbacks with the backdrop of business and wider society. In his after dinner and keynote speeches, he delves into the strengths and weaknesses of different styles of leadership, and provides a genuine and affectionately good-humoured insight into his old sparring partners Tony Blair and George W Bush.

He describes the huge impact of demographic change and the importance of patterns in military spending alongside wider economic trends, and analyses where power will lie in the decade ahead.

William is now an advisor to the JCB Group and Terra Firma Capital Partners, and in 2015 was asked to take over as chairman of London’s military thinktank, the Royal United Services Institute.

He also embarked on a high-profile pairing with Hollywood star Angelina Jolie, and together they are on mission to end sexual violence in conflict zones.

Contact us today for further information on our after dinner speakers or to book William Hague for your event.