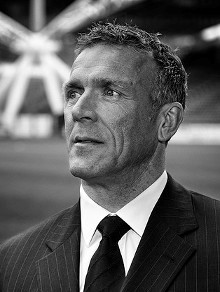 Alec Stewart OBE is the most capped England cricketer of all time. He is an inspirational and charismatic after dinner speaker and motivational speaker.

Alec took over the England captaincy from Mike Atherton in 1998 and promptly led the side to its first major series win for 12 years, against South Africa. He hit top form again during the 2000 one-day triangular series, and when he scorched a century in his 100th Test, the sheer length of the standing ovation he received suggested that Stewart had become a national institution.

Against India at Lord's in 2002, he crowned his achievements by becoming England's most-capped Test cricketer, overtaking Graham Gooch's record of 118 matches.

Alec works as a regular cricket analyst on Radio 5 live and across Sky Sports and the BBC's cricket coverage.

With his vast experience and respect within the sporting world, Alec has plenty to offer on leadership and motivational skills. His business focused speech 'Leave Nothing to Chance' mirrors his approach of preparation and dedication. Combined with his natural comic timing, Alec ensures an entertaining, enlightening and thought provoking speech which can also be tailored to after-dinner.

Contact us today for further information on our after dinner speakers or to book Alec Stewart for your event.