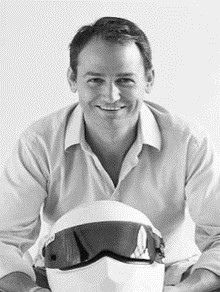 Ben has won races in just about every category he contested, from Formula Three to Le Mans Sportscars and GT. In 2003, racing for RML, he captured the European ASCAR title. When a lack of funding temporarily curtailed his racing career, Ben joined the Army Reserves. He also began working as a Hollywood stuntman.

His TV breakthrough came when he was cast as the fourth presenter on BBC TV’s Top Gear programme. Known as The Stig, his task was to coach celebrities on how to get the best out of a “reasonably priced car”, organise car chases through cities and across continents, and test hundreds of priceless cars, sometimes to the point of destruction.

With his role as The Stig now over, Ben has returned to his first passion; motor racing. He rejoined the team that last gave him a championship title, RML and co-drives the team’s Lola HPD in the Le Mans Series.

Contact us today for further information on our after dinner speakers or to book Ben Collins for your event.