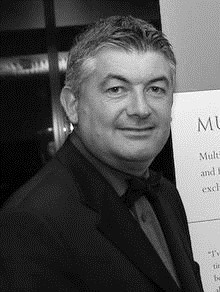 John Parrott is a former World snooker champion and well known for his role as team captain on the popular BBC One show ‘Question of Sport’.

John is an amusing and charismatic after dinner speaker and adds value to corporate events.

John was a highly successful snooker player and became the European and World snooker Champion. Since retiring from the sport he has joined the BBC snooker team as a pundit and presenter, he has worked at sporting events including Derby, Royal Ascot and the Grand National.

Due to his extensive knowledge of sport and his charismatic personality, John was asked to be the Captain of one the teams on ‘Question of Sport’; he sat across from Ally McCoist who was the other team Captain. The banter between the pair and the host Sue Barker made the show a huge success and John appeared on the show for a total of six years.

John is an exceptional after dinner speaker, his dry wit and engaging personality make him an ideal choice of speaker for corporate events and he will not fail to impress audiences.

Contact us today for further information on our after dinner speakers or to book John Parrott for your event.