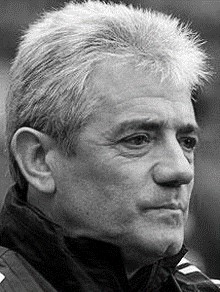 Former Liverpool legend, and one of the UKs best loved players and managers, Kevin Keegan took on the mantle of the head of the national team in 1999.

Former European Footballer of the Year and lauded pundit, Kevin is a football guru, an experienced presenter and a popular personality.

After 120 appearances for Scunthorpe United, Kevin was scouted by Liverpool, and so the infamous career began. Lifting the FA cup, the UEFA cup and league cups by the dozen, Kevin had made his mark. His shock move to German side SV Hamburg made him a European hero, and he led the team to a league title and a European Cup final. Back to the UK in 1980, Kevin joined Southampton, and eventually moved to Newcastle United.

Trying his hand at business, Kevin retired from playing but returned as Newcastle manager in 1992. Narrowly avoiding relegation, he proved that his analysis and leadership skills matched his genius footwork. In January 1997 Kevin quit Newcastle to take the helm at South London club Fulham.

When Glenn Hoddle vacated the England manager’s job in 1999, Kevin stepped in. Kevin moved back to the North West and eventually made an unexpected return to Newcastle United in January 2008.

A year after his departure from Newcastle in 2008, Kevin resurfaced as the lead pundit on satellite sports channel ESPN and as an ITV pundit during the 2010 World Cup. He was also part of ESPN's live coverage of the 2011, 2012, and 2013 FA Cup finals.

Contact us today for further information on our after dinner speakers or to book Kevin Keegan for your event.