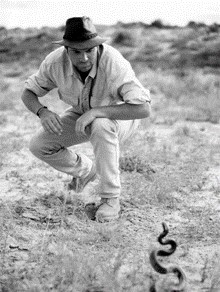 Steve Leonard is a Veterinary Surgeon and TV Presenter on wildlife shows, he is an entertaining and sought after keynote speaker.

During his last year at Vet School he was involved in a BBC Documentary focused on Veterinary students in their final year. The series was called ‘Vet School’ and was a huge success; so much so that another series called ‘Vets in Practice’ followed. Steve spent his first year as a vet working in Lancaster, treating farm animals and pets, while also being filmed by the BBC.

Steve’s TV success continued as he was asked to be involved in ‘Vets in the Wild’, which meant that he would travel around Africa working amongst other Wildlife vets - a dream come true for Steve.

His next television appearance was as a presenter for a series called ‘Ultimate Killers’, this time Steve travelled the world and got close to various weird and wonderful creatures. In 1999 he began working as a wildlife presenter for a host of channels including ITV, the BBC and Animal Planet and Discovery.

Steve has travelled the world as a Wildlife presenter and has a vast amount of knowledge on animals which he can share with his audience. He has the ability to entice and inspire audiences with his many stories.

Contact us today for further information on our after dinner speakers or to book Steve Leonard for your event.