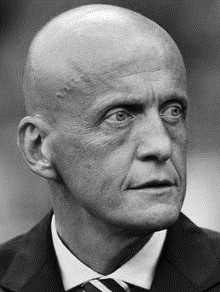 Pierluigi Collina was without a doubt the world's greatest football referee and is one of the most recognised faces in the world today.

He reached the highest level in the game and was renowned for his pinpoint decision making, fairness and calming influence. His amusing after dinner speeches include anecdotes from both on and off the pitch and he also delivers motivational speeches for conferences.

He has been a referee since 1977 and was voted best referee of the world voted by IFFHS for 6 consecutive years between 1998 and 2003 as well as best referee in the Italian league for 6 years.

Outside of his football and professional life, Pierluigi is an energetic champion of good causes. He was International Red Cross’ ambassador for the campaign “Children in war” in 2004, and FIFA Ambassador for the SOS Italia Children Villages. He is the author of the book “The Rules of the Game”, published in Italy in 2003 and translated in more than 10 different languages and 20 countries.

Pierluigi provides a fascinating glimpse of what it takes to be the best and stay the best and how dedication to a goal in life has led to fame and success.

Contact us today for further information on our after dinner speakers or to book Pierluigi Collina for your event.