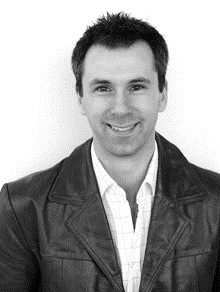 TV and Radio presenter, and technology guru, Spencer Kelly has broadcast to the nation upside down, mid-air and hanging off a cliff-face.

His no-fear policy and engaging, witty style makes him the consummate awards host and after dinner speaker.

Spencer graduated with a double first in Computer Science from Cambridge University, and then proceeded to put it to excellent use by becoming a radio presenter. He spent two years patrolling the south of England in a small plane for the Ocean Radio Group, performing aerobatic stunts in between travel reports. He nearly died in a mid-air collision, and owes his life to the pilot and his quick reactions.

In 2003 Spencer joined the BBC as an interactive presenter, and soon moved to the TV technology programme Click Online. It was here that his passion for science and technology could really flourish, presenting items on wide-ranging and challenging topics, from quantum computers to child abduction.

Filming features and fronting programmes from such exotic locations as Thailand, Finland and Essex, he has attempted to make technology look simple. As well as presenting Click, Spencer has presented Channel 5's Gadget Show.

Contact us today for further information on our after dinner speakers or to book Spencer Kelly for your event.