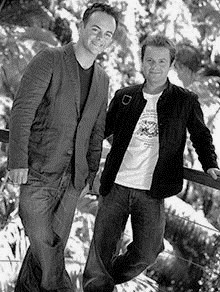 Ant and Dec For Hire

Prime Time Saturday night was taken over by the boys when they launched the award-winning ‘Ant and Dec's Saturday Night Takeaway’, which ran for twelve series.

In 2002 came ‘I'm a Celebrity….Get Me Out Of Here’. The show continues to hold a popular and secure slot in the annual TV calendar.

ITV1’s ‘Britain's Got Talent’ was launched by the duo in 2007. The final peaked at 11.2 million viewers, becoming the highest rated entertainment programme of the decade alongside ‘I'm A Celebrity…Get Me Out Of Here’.

Contact us today for further information on Ant and Dec or to make a booking.