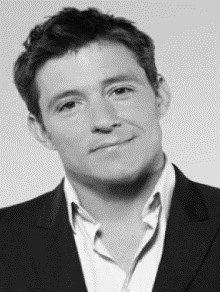 Ben Shephard, known and loved as a TV sports pundit and corporate awards host, is warm, charismatic and professional.

He connects with his guests, on TV and stage, and is a corporate host and presenter of the highest calibre.

He played a major part in the return of retro TV brainbox quiz ‘The Krypton Factor’, and worked for 8 years on ‘Behind the Magic of Harry Potter’ for ITV1.

His interview techniques are challenging yet engaging and Ben has been known to bring high-level politicians such as David Cameron and Gordon Brown round to his way of thinking, as well as using an honest and charming approach with international superstars such as Madonna and Angelina Jolie.

Since April 2014, Ben has co-hosted the ITV breakfast show ‘Good Morning Britain’, alongside Susanna Reid. He previously hosted ‘GMTV’ from 2005 until 2010.

Contact us today for further information on Ben Shephard or to make a booking.