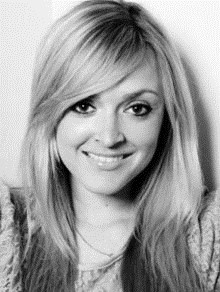 Hugely popular on both sides of the pond, television presenter Fearne Cotton is a superb awards host & is available for product launches & personal appearances.

Fearne began her presenting career when she was 16 and within a few years of learning her craft on children’s programmes including ‘Smile’ and ‘The Saturday Show’, she moved over to mainstream TV and radio broadcasting. She presented ‘Top of the Pops’ with Reggie Yates until the show ended in July 2006.

Since 2008, Fearne has appeared as a team captain on the ITV2 comedy panel show ‘Celebrity Juice’ alongside Keith Lemon and Holly Willoughby.

Since 2009 Fearne has designed and endorsed her own fashion and home ranges for Very.co.uk, and in September 2009 took the reins from Jo Whiley to present the popular Radio 1 weekday 10am -12.45pm slot. She left Radio1 in May 2015 after a very successful 10 years.

Contact us today for further information on Fearne Cotton or to make a booking.