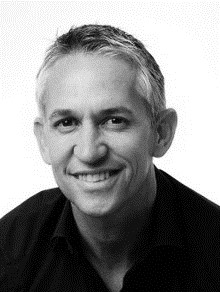 Gary Lineker is a former professional footballer and popular sports TV Pundit, he is also recognised as the face of the Walkers Crips advertisements.

Gary retired from international football with 80 caps and 48 goals to his name and decided to pursue a career in media. Gary’s media career began on Radio 5 as a football pundit and he was then hired by the BBC to take over Des Lynam as the BBC’s main football presenter, he presented ‘Match of the Day’ and ‘They Think It’s All Over’.

His media career has gone from strength to strength and he now works for the NBC Sports Network, covering Premier League Football and he also presents some of the coverage for the US version of ‘Match of the Day’.

Gary can also be recognised for his roles in the Walkers crisps adverts, which he was started doing in 1995.

Gary is a talented awards host and after dinner speaker, his humour and charisma never fails to impress audiences and he keeps the crowds entertained at corporate events.

Contact us today for further information on Gary Lineker or to make a booking.