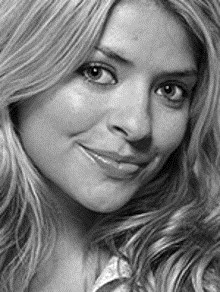 Holly Willoughby is a TV presenter best known for her work on ITV; she currently co-presents 'This Morning' with Phillip Schofield.

Holly was discovered at age 14 by Storm Modelling Agency whilst on a school trip. In just a few years she had been the face of ‘Rimmel’, the body of ‘Pretty Polly’ and appeared on the covers of various women's magazines.

In 2011, Holly co-presented charity telethon ‘Text Santa’ with Ant & Dec and she returned to co-host the show with Phillip Schofield in 2012 and 2013.

Holly began presenting ‘The Voice UK’ with Reggie Yates in 2012 and the same year began hosting a revived version of ‘Surprise Surprise’ which began its fourth series in 2015.

Contact us today for further information on Holly Willoughby or to make a booking.