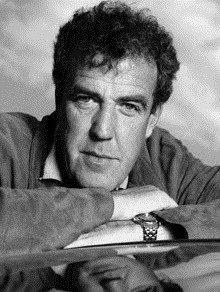 Jeremy Clarkson is a famous ‘petrolhead’ and former presenter of the popular television show ‘Top Gear’, the show has been one of the most popular shows on BBC Two and is shown all over the world.

Top Gear became an international success and ran for over twenty years and has seen a host of celebrity guests on the show. Jeremy’s other television appearances include his talk show ‘Clarkson’, which ran for a total of two years, ‘Grumpy Old Men’, ‘Have I Got News for You’ and he has appeared on ‘Friday Night with Jonathan Ross’.

His love of cars is evident through his collection which includes a Lamborghini Gallardo Spyder, a Mercedes-Benz SL55 AMG, and an ex-military Land Rover Defender.

Jeremy is an ideal choice of awards host for corporate events; his charisma and dry sense of humour have made him a hit with corporate audiences at numerous events.

Contact us today for further information on Jeremy Clarkson or to make a booking.