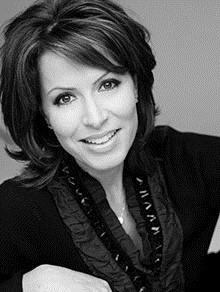 One of TV's leading news broadcasters, Natasha Kaplinsky revealed one of her other talents when she became the first winner of Strictly Come Dancing.

Natasha joined the BBC in November 2002 to co-present Breakfast with Dermot Murnaghan. She went on to present the 6 O'clock News until October 2007. In 2008, Natasha made a high profile move to Channel Five, to host FIVE News with Natasha Kaplinsky.

In Spring 2004 Natasha showed that she was so much more than just a news presenter when she took part in ‘Strictly Come Dancing’; she went on to win it with her coach Brendan Cole.

Natasha hosted the BBC's Bafta red carpet coverage, and joined Terry Wogan in co-presenting ‘Making Your Mind Up’, the show which decided the UK's contestant for the Eurovision Song Contest.

Natasha Kaplinsky is one of the most sought after conference facilitators and awards hosts - she adds charm and professionalism to any event.

Contact us today for further information on Natasha Kaplinsky or to make a booking.