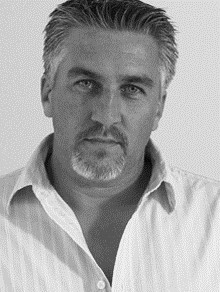 Paul Hollywood is well known for his judging role on the popular BBC television programme ‘The Great British Bake Off’.

He is an accomplished and entertaining awards host and also available for baking demonstrations at corporate events.

Paul worked as the main baker for various established hotels in England including Cliveden, Chester Grosvenor and The Dorchester during which time he became well known as one of the UK’s most talented bakers.

With his foreign techniques and homemade recipe, Paul launched his own brand of bread called ‘The Paul Hollywood Artisan Bread Company’, which supplies Harrods as well as other well-known stores.

Paul’s television debut was on the Carlton Food Network and he presented two series of ‘Taste’ alongside James Martin. Paul has since made television appearances on BBC and ITV and his career progressed further when he became a judge on the very popular BBC Two programme ‘The Great British Bake Off’, which has won a BAFTA and been nominated for an RTS award.

Contact us today for further information on Paul Hollywood or to make a booking.