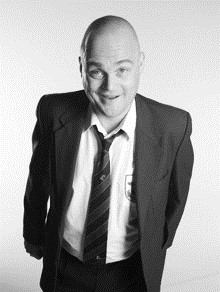 His break came in 1994, when he was invited to compere in Harry Hill's Edinburgh show ‘Pub Internationale’, and created the pub landlord character.

Nominated for the Perrier more often than anyone else and after a wrangle as to whether he was 'too famous' to win it, Murray won the Perrier Award with a show based around the Pub Landlord character. This led to stage shows including ‘And A Glass Of White Wine For The Lady’, ‘My Gaff’, ‘My Rules’ and ‘Who Dares Wins’.

Al Murray has made numerous television appearances including Comic Relief in 2009 and Jack Dee Live at the Apollo. He also starred in his own ITV series Al Murray's ‘Multiple Personality Disorder’ in 2009.

In 2015 Al stood at the general election for the hotly contested Kent constituency of South Thanet, against Nigel Farage, under the banner of the newly formed Free United Kingdom Party.

Contact us today for further information on Al Murray or to make a booking.