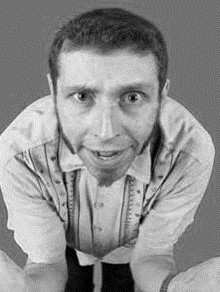 The inventor of Docu-comedy, Dave Gorman doesn't just talk and write comedy - he lives it.

Dave became known for his show ‘Are you Dave Gorman’ when he and Danny Wallace travelled around the UK trying to find other men by the name Dave Gorman and taking a picture of every one they met. This was then televised into ‘The Dave Gorman Collection’.

Dave’s other television appearances include his role as Team Captain on Rob Brydon’s ‘Annually Retentive’ on BBC Three, ‘The Frank Skinner Show’, ‘Never Mind the Buzzcocks’ and ‘They Think It’s All Over’.

In September 2013, he returned to television with a new show ‘Modern Life is Goodish’ launched on Dave. In January 2014, the show was renewed for two more series. A third series ran from Sept/Oct 2015 with 2 further series already commissioned before the third had even aired.

Contact us today for further information on Dave Gorman or to make a booking.