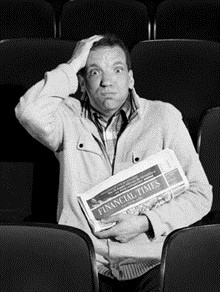 Not known for their sense of humour, not many German comedians break the mould and conquer the UK scene – except Henning When.

He experienced a disappointing open mic night which led him to believe that he could do better – and to style himself as the ‘German Comedy Ambassador'.

As Winner of the Hackney Empire New Act of the Year in 2005, Henning hit the ground running. With many appearances alongside fellow German performer Otto Kuhnle, their show 1000 Years of German Humour was nominated for the Barry Award at the 2009 Melbourne Comedy Festival, and turned the pair into household names.

He has also appeared regularly on TV comedy classics, including ‘8 Out of10 Cats’, ‘Room 101’, ‘Stewart Lee's Comedy Vehicle’ and ‘QI’.

Using varied topics, from football to the price of second-hand shoes, Henning’s laid back style belies an astute and strategic comedian who has Britain eating out of his hand.

Contact us today for further information on Henning Wehn or to make a booking.